A rare jewel in the desert, the Monarch Ranch is located on over 5 miles of the pristine Devils River 30 miles upstream from Lake Amistad. Stunning views of the Devils River Basin and deep canyons greet visitors to the ranch as you climb over 300 from the river. Fantastic hunting and fishing, miles of paved roads and a 6,000 lighted and paved airport runway make the ranch extremely accessible in this dramatic country. The purported largest volume cave in Texas and remains of Fort Hudson are just a few of the amazing sites to visit on the ranch.
Location: The ranch is located on Highway 163 near Bakers Crossing, 25 miles north of Lake Amistad and also has frontage on FM 1024 from Comstock.
Habitat: The Monarch Ranch is found where multiple eco-systems meet, including elements of the Chihuahuan Desert, Edwards Plateau and Tamaulipan Thornscrub along with deep river basin soils containing towering pecan trees and majestic live oaks along the river-bank. The property contains important portions of the Devils River watershed including its recharge zone, tributaries, springs, riparian gallery woodlands, caves and karst aquifer systems.
Along the lower lands of the river and canyons, live oaks, pecans and sycamores dominate the landscape. Much of the area along the river is a true riparian eco-system with reeds, tall bunch grasses and cane breaks dominating the zone.
As you move away from the river, the ranches steep topography is dominated by ashe juniper, some oaks, and cacti. This is a very rugged country with breathtaking views and caves for exploring.
The upper highlands have extensive native grasses, diverse brush species and some ashe juniper dominating the landscape.
Wildlife: The multitude of differing environments on this ranch creates country that has an amazing biodiversity. White-tailed deer are found throughout the ranch, and the occasional mule deer can be found in the highlands. Turkey are plentiful in the bottoms along with a strong population of bob-white quail. Aoudad Sheep are found along the steep cliffs and canyons coming up from the river bottom. Blue quail are common in the highlands, along with strong populations of mourning dove. Bobcats, coyotes, badgers, and mountain lions are also very common in the area. There are also several species of exotics which are found on the ranch including elk and axis deer.
The Devils River brings in a host of wildlife that might not be commonly found this far west, including plenty of ducks, amazing migrations of monarch butterflies and raptors such as Bald Eagles and Ospreys that hunt the fish in the river.
The Monarch Ranch is managed under an MLD III plan (currently referred to as a MLD Conservation Plan), allowing for extended seasons for deer hunting and professional management of the wildlife.
The fishing in the Devils River on the Monarch is truly lights out. Perhaps the best small mouth bass fishery in the State of Texas exists in the cool clear waters of the river here with many fish exceeding six pounds. Largemouth bass are also abundant along with bream and catfish.
Water:
The Devils River is considered the purest water in the State of Texas and is used by the State as the index for clean water. The rivers headwater springs are on the neighboring ranch up river from the Monarch. The ranch has over 5 miles of frontage on the river, including over a mile and a half of both sides of the river.
There are multiple springs on the ranch, including a large spring (Phillips Spring) that feeds pristine water into the river. Further, many seeps can be found in the canyons, particularly during wet periods.
Groundwater is available in this region that is of excellent quality. There are 25 water wells on the property (electric pump, solar and windmills) as well as miles of water pipelines distributing the water throughout the property.
Improvements: Housing on the Monarch is modest and not too extensive. On the west side of the river there is a mobile home used for the ranch foreman and a pilots cabin near the airport that is relatively new and very comfortable. On the east side there are several modular homes and the main lodge that sits along the river bottom.
The airport on the west side of the ranch has a newly paved 6,000 runway with stripes and lights and includes a large hangar and fuel tanks.
There are over 13 miles of paved roads on the ranch that are in excellent condition and make getting around the extensive ranch very easy. The ranch also has the only private bridge over the Devils River in existence.
Electricity: There are multiple access points to electricity throughout much of the ranch.
Minerals: Approximately 13,000 net mineral acres are owned by Seller on the Monarch, and there are significant State Classified Minerals on the ranch as well.

Conservation Easement: The owner of the Monarch Ranch donated a conservation easement on this fabulous property to help conserve this unique part of Texas. The ecological values along the Devils River warrant stewarding and protection for future owners and heirs to enjoy the quiet solitude it offers. Thousands of acres along the Devils River have Conservation Easements which ensure that much of the area will remain in its natural state and be an oasis of nature. This working example of cooperative conservation has brought private land-owners, Texas Parks & Wildlife Department and The Nature Conservancy together with a common goal to keep the wild Devils River wild and running clear for the future. As owner of the property you would be part of one of the largest conservation neighborhoods in Texas.
Highlights of the easement include:
The Monarch East Ranch and Monarch West Ranch may each be subdivided into two separate ranches.
There are currently six existing home sites on the Monarch East Ranch which can be maintained and remodeled by the owner. On the Monarch West Ranch there are currently two existing homes which can also be maintained and remodeled.
A total of six new Residence Compounds may be built on the Monarch Ranch. Each of these compounds may be up to ten acres and multiple buildings may be built in each new compound. These compounds may not be built within any of the No Development Zones with the exception that two new compounds may be built near the river on the Monarch West (there is currently an existing building compound on the Monarch East river frontage).
New roads may be built to access the new Residence Compounds and all existing roads may be maintained and improved.
Livestock grazing, crops, orchards and vineyards may be grown on the property outside of the No Development Zones.
No restrictions on hunting and fishing, blind placements, etc.
Established caliche pits are recognized on the ranch and may be used to maintain existing roads and build new roads to residence compounds. 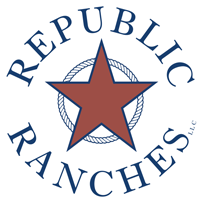 Republic Ranches, LLC is a referral broker based out of Houston, Texas. They are an elite farm, ranch and rural properties brokerage firm serving many states They have offices in Austin, Corpus Christi, Dallas, Hondo, Houston, and San Antonio that allow them to effectively cover a broad region of the finest ranches in North America. As a team, they bring a new level of professionalism, talent, dedication, and unwavering ethics on behalf of their clients. 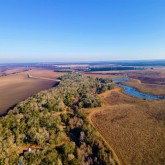 Five Oaks Ranch is a premier 550+/- acre hunting and recreational property located in the heart of the central waterfowl flyway near Bay City, Texas approximately 2 miles west of the Colorado River, and 10 miles north of the Gulf of Mexico. Topography and Habitat: 50% of the ranch is covered in heavy woods with 500+-year-old live oaks and two miles of live-water creeks that traverse the property. This habitat holds healthy numbers of deer and wild hogs that provide combination....Read More 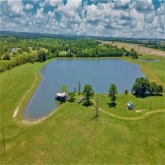 Running M Ranch is a true gentlemens cattle ranch located just 12 miles south of College Station. The ranch is set up well to continue running a high-end cattle operation, own a fantastic recreational ranch, or as an investment for future development. The property boasts a classic ranch home overlooking a 20 acre fishing lake, several other large lakes, over 2 miles of Navasota River frontage and almost a mile of frontage on Hwy. 6 between Navasota and College Station. ....Read More 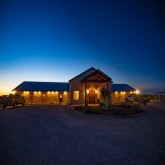 With stunning views, outstanding hunting, star filled night skies and first class improvements, Rock Canyon Ranch is a true gem located where the Trans Pecos, the Hill Country and the Brush Country come together in Val Verde County. At about 10,700 acres with sweeping valleys and awesome ridgelines, Rock Canyon is in an elite group of large high quality Texas ranches. This ranch boasts some of the finest native and exotic game hunting in the area, with both high fenced and low fenced....Read More 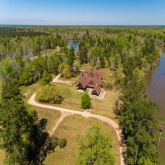 Hidden along the banks of the Neches River on a historic high point is Bear Mans Bluff Ranch. The stewards of this ranch have transformed the land into an idyllic family retreat that features the highest end of authentic Texas ranch lifestyle. The main lodge sits overlooking the river, surrounded by massive oaks and cypress trees. Sitting on the porch carries owners and guests to a simpler time, while offering extensive comfort and convenience. Miles of trails, a beautiful bass lake,....Read More 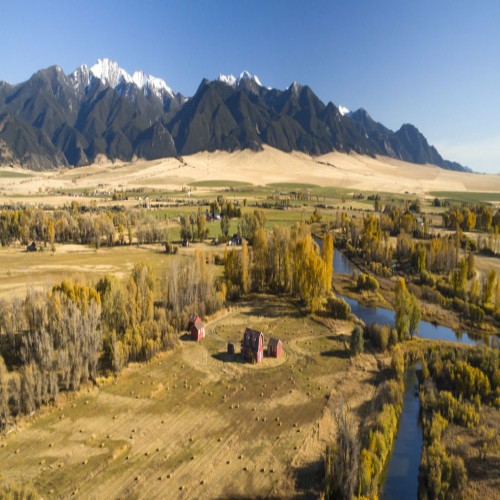 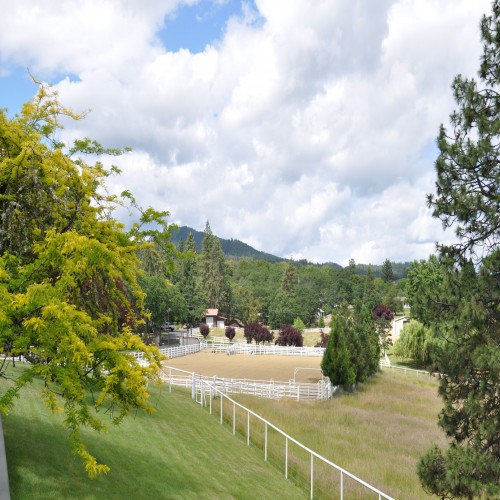 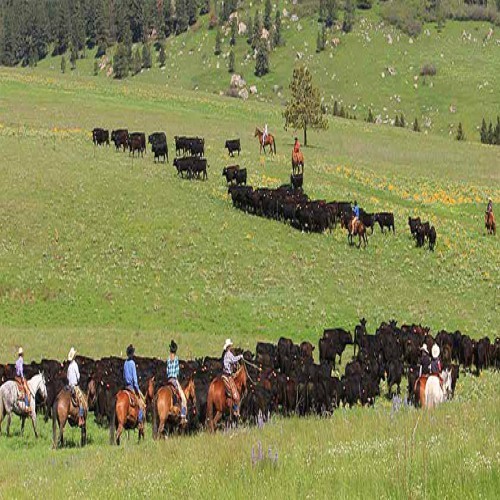 For more information about our website or specific orders, please call or email us. 714-622-2774 [email protected]